Going people and planet-friendly from the bottom up 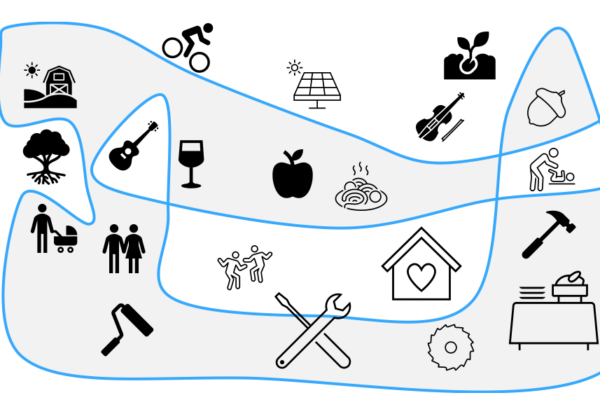 We can out-cooperate the planet and people unfriendly culture

Is that feeling getting to you? You know, the one where you start to feel that our human civilization, with its 7.8 billion hostages, is collapsing, ecologically, economically, and, inevitably, to some extent socially as well. You want to do something about it, but you don’t want to glue yourself to a crossing to stop traffic nor wait around for government leaders at the UN’s COP26 climate conference to change things. So what do you do?

Don’t feel hopeless. Starting at the local level we can transform the current consumer culture into a planet culture. A planet culture is one where we, based on our understanding of the way nature works, share, exert our buying power, use our entrepreneurial ingenuity and as a group voice our true opinion.    Combining our purchasing power can lower costs while rewarding planet-appropriate suppliers and shunning those who are destructive of  the planet.

Working with some of my colleagues from Pivot Projects, I’m developing a non-profit organizational support structure and technology to help people start and run what I call 146 Clubs—local buying and sharing clubs that bring people together at the local level in ways that help save the planet and civilization.

The 146 part is derived from “Dunbar’s number.” In the 1990s, British Anthropologist Robin Dunbar concluded that 150 was the cognitive limit to the number of people with whom one can maintain stable relationships. We chose the number 146 for our clubs because it’s very close to 150 but rolls off the tongue nicely.

The idea is that if you build organizations with no more than 150 (or 146) members they’re more likely to hold together and get the job done. One example of the Dunbar number in action is the company W.L. Gore (maker of Gore-Tex), which found that if it had more than 150 employees working together in a building, social problems would emerge. So they built offices and factories so they could keep their teams small and cohesive.

We evolved to cooperate in groups  – not to be consumers and workers. That’s what we’re looking to harness in our 146 Clubs.

Here’s how 146 clubs might  work: Club members  borrow from each other, buy together and invest and build together. They also form pressure groups on local politics. We propose looking among your neighbours to find club members – preferably within walking distance. You will need to begin talking about how you can all ensure the basics to your families in the face of what looks more and more like an economic collapse stemming from climate change and resource misuse.

Sharing and shared bulk purchasing are already happening, but we believe they will blossom when clubs get their own marketplace. Think of it as a virtual indoor market that is owned and run by neighbours. That is what we are developing – in technical terms a platform cooperative.

It might work like this; Let’s say  Pete knows some local farmers. He puts it to them that they could supply most of the food Pete’s club needs during the year. At the same time Pete canvasses the club members (our technology will help here, too) to see what they would need in terms of types of food. Pete forges a deal with the farmers and club members sign up. There is little waste. All the farmers’ produce goes to the club. Even the miss-shaped carrots find a home. It’s financially efficient as there are no middle-men (except Pete who gets a small percentage for his hard work) and there is no need for packaging. The farmer brings the food to the club’s shared store space which is available 24/7 via a code lock. It is planet-friendly because the club specifies that it wants only organic production.

We suggest you start with five people to get going and gradually build to 15, to 75, and then to 150. It’s best to start in your own neighborhood with your own neighbors by organising events like flea markets and coffee mornings – or block the street off to make a kids play area for half a day, whatever works. As people get to know and trust each other, you can introduce the idea of forming a 146 club with just a few functions. (Our platform is being filled with suggestions for going from meeting to creating your own market.)

As you expand you will doubtless find people who don’t share all of your beliefs. Don’t try to talk them out of their beliefs. Find common ground and build on it.

One inspiration for 146 comes from the Inuit Hivshu (given name Robert E. Peary II, named after his great-grandfather, the famous explorer.) Hivshu lives in Greenland and has taken on the mantle of preserving Innuit  heritage. (His tribe is about 200.) When I met him he turned up with a skin bag that  contained all an Innuit needs to survive in cold Greenland—things like a soap stone lamp, a harpoon, a drum.  He told me that he talks to his ancestors a lot. He often asks them “Hey, why did you choose to put us all here? It’s actually quite cold and dark for a good part of the year.” But there is a message of hope here. If the Innuit learned to survive and thrive with such simple tools under such hard circumstances, then surely we can learn to survive and thrive in a world where we face tough challenges. We can learn from them how they did it, not the technology used to live in extreme cold exactly, but the social technology. How to be with each other in a small unit that lives and thrives in difficult circumstances.

We need to get together, use what we have, and borrow, share, make, invent, and prepare together. The 146 Clubs can help us do that.